In the latest issue of INVEST: Miami 2015 there was a section dedicated to an interview with Governor Rick Scott  to discuss Miami-Dade’s economic significance and the impact large public investments will have on the Miami-Dade County area.

Below are some highlights of what was discussed:

When asked how do the public and private sectors work together to advance growth in counties like Miami-Dade, the Governor responded that in Florida the government is always doing business with the private sector. For Instance, Enterprise Florida is an organization that promotes economic development in the state and is funded by both public and private dollars, some of the major infrastructures projects in Miami-Dade like the PortMiami Tunnel or the Deep Dredge Project are also conducted through public-private partnerships.

Another question asked was: What is the state’s strategy to ensure that transportation infrastructure keeps paces with rapid growth , especially in Miami-Dade? Rick Scott assured us that today we have the largest transportation budget in the state’s history –over $10 billion. Massive dollar amounts are being places into our ports and Port Miami is the biggest beneficiary of that. We are actually the number-two state in the US for trade infrastructure.

He concluded by stating that Miami-Dade is doing really well in a number of areas such as trade, education and professional services. In the last 12 months the county added 42,000 jobs and brought unemployment down to 5.8 % in Miami-Dade County lower than Los Angeles (8.6%) and New York (7.1%). Tourism generated tens of thousands of jobs and contributes 24% to our sales tax. People from around the world want to live, visit and do business here. Miami speaks a very wide variety of languages and it is clearly one of the best melting pots in the world.

Let us be excited and optimistic about the future of Miami-Dade as it has a very flourishing economy!! 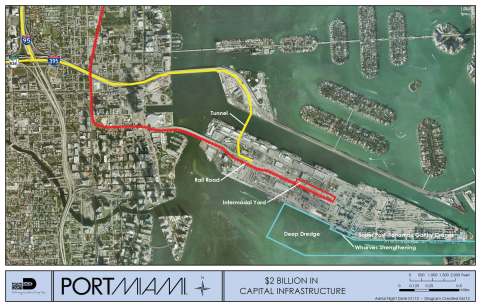